last year, while working at the hotel, i introduced Jaimin and Ritin to Pumpkin Carving. their mom-Rita-and dad-Raj-had never carved pumpkins before either, so the adventure was a new one for all involved. i gutted the pumpkins and baked the seeds for them. they had such a good time last year that i decided, even though i don't work for Rita and Raj any more (we're still friends which is great, because they are the best people i've ever had the pleasure of working for and with), that i would make the pumpkin carving practice an anual event. so again, i gutted the pumpkins and baked the seeds (though i don't think they turned out as nice as last year) and went over to the hotel for some carving ^_^

below are some pictures of the "pun-kin" fun! 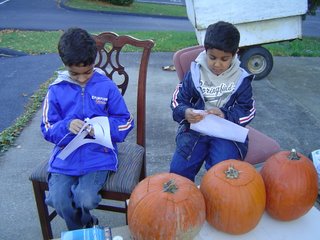 on the left is Jaimin, on the right is Ritin. step one is a little boring... 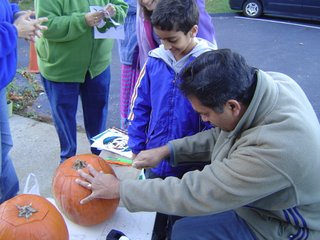 ... Raj helped Jaimin with the actual cutting of the pumpkin after he'd drawn the design onto the pumpkin face. 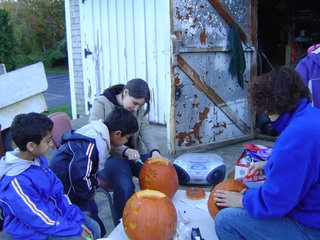 i ended up helping Ritin and Kaylin's mom, Cecilia, helped her. 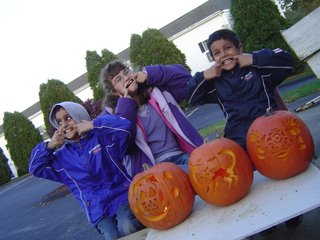 i took about... 15 pictures of these three little monsters and in not one are they all looking in the same direction!!! kids. amazing. 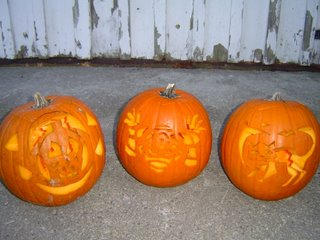 and the finished product ^_^ a pumpkin on a punpkin, a spooky crazy doctor guy, and a creepy cat!
happy halloween everyone!!
Posted by katy at 4:35 PM

Katy,
The boys love there picture in the computer. What lovely fun they had and thanks to you so did Raj and I.
Thanks for doing this again this year, the boys are already looking forward to next because now you are there Halloween Guru!!!
Rita

cute pics! the pumpkin on pumpkin is SOOOO postmodern ;)

rita, i like being the halloween guru ^_^ maybe next year we'll make things even more exciting and do a haunted house or something too!!!

cs, you and your postmodern pumpkins!