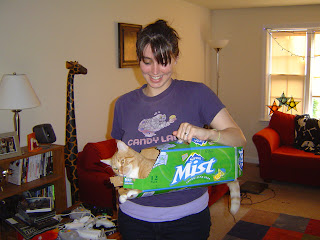 ashraf brought this to my attention. fun. good. fun is good. and so is hapa nui.
Posted by katy at 9:51 AM No comments:

i have abandoned my cradle
for longer struggles
and shorter lines
Posted by katy at 10:08 AM 2 comments:

and upon waking
the yawning claws of a cat
stuck in between the strands of my hair
Posted by katy at 3:58 PM No comments:

ryan called me at the pizza/sub place i'm working at last night. it was around 7 or 8 i guess... he told me that Chris Benoit and his family were found dead in their home.

my first thought... i'll never see him wrestle in person. selfish, maybe. but like ryan said, there's nothing wrong with respecting the guy enough to want to see him wrestle--which is what i respect him for.

i've been checking wrestlezone.com this morning... a double-murder suicide. but we don't *know* who did it. Chris maybe - that's what's suspected at the moment. but based on what everyone says about him and what they said about him *before* he passed away... it doesn't seem to me that Chris had the maddness in him to do what's been done... to kill his seven year old son... his wife... himself. and just as he was about to become the ECW champion...

there are a lot of these tributes from WWE wrestlers, but CM Punk's was the most relevant to my initial reaction.

i told ryan last night that the news to me was disturbing. that's the word i chose for it.

...the world's perception of an individual changed overnight from one of the absolute best men in the wrestling industry to a potential murderer. how do you respect a man with the capacity to kill his own family?

the landscape of my knees
shifted in the raised dirt
where the middle finger
on my right hand turned purple
and i feared it would break off.

until last night. i felt
the sensation of a dream
i'd had with you, in it my face
grew swollen on one side
until i couldn't hear or see.

the money i owed him was missing
but he needed it now
to save himself from crying
and the fish were all in separate tanks
to keep them from fighting to death.
Posted by katy at 9:37 AM 5 comments:

yesterday was father's day. but instead of celebrating my dad, my family mourned for the family cat.

i call ra 'the family cat' because although i picked him out from his litter when he was just a tiny tot--merely the size of my hand--he's been in the care of my mom and dad since i went to college 6 years ago and moved with them to their new house 3 years ago.

he wasn't just our family cat though... while living in brewster, ra frequented the neighbors across the street--they had a little fish pond in their back yard for summer fishing and a fire place for those cold winter evenings. in yarmouth--where my mom and dad and brother now live--ra made himself comfortable on just about every neighbor's back deck. almost every, that is... there's that one house with the 4 big dogs that he was just too smart to get involved with.

he was a big cat. the biggest. so much so that we weren't sure he was actually a cat... more of a furry dinosaur (which we referred to him as often).

here he is during his awkward adolescent years... 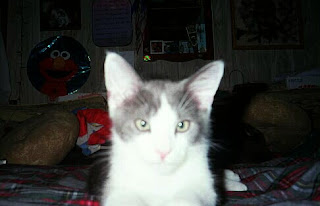 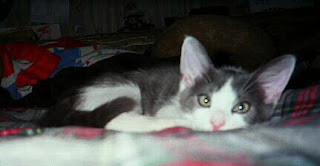 big ears, long face. by this time in his life he'd already ventured into the wilderness of cape cod. he'd been stuck up a tree so high that he couldn't get down--i saved him with a really tall ladder. he started off hunting chipmunks, but it didn't take him long before he started going after birds and rabbits.

ra grew so big, so fast. it's no wonder he had blood-clots. his heart just couldn't keep up with his rapid-hunter lifestyle and his sheer body mass. 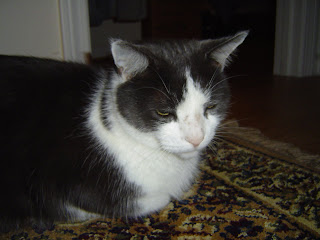 you can see the scars on his nose in the picture above. he was strong and aside from a chip in his ear, he didn't keep any scars for long. he was a warrior. bold and aggressive. he scared meaghan's german shepard--the dog's tail went between it's legs as it ran away from ra.

he looked after his family. he left parts of rabbits and birds and half-eaten mice for my dad to find on the step in the morning. although we never ate the tasty treats he'd leave us, we appreciated the gesture nonetheless.

and although he looks awfully brutish and sort of scary, he was really quite handsome and gentle. 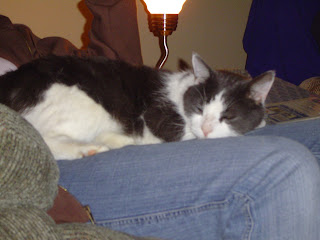 he loved to be with his family. loved to be pet and brushed and talked to. he even joined us for dinner every night--although that may have been mostly to do with the meat that was being served... he could eat. 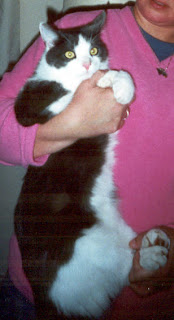 he let us hold him--although at nearly 20pounds, he was a big cat to go picking up and carrying around, so it didn't happen too often--and never fussed.

my mom called me yesterday morning around 11. i heard ra screaming in the background, pippin (the corgi) yelping. i knew when i heard him that it was really bad.

new years eve two years ago (2005 into 2006) ra lost the control over one of his legs. he cried. we gave him half a tylenol and he slept for a while, then eventually got up and walked outside. he was fine.

so the blood clots had been effecting him since then, if not well before. the vet says that they cause serious pain, and that he'd likely been suffering for a very long time, just not showing it.

like i said before though... ra was a warrior. he was strong to the bitter end.

after my dad got home from his brunch with friends, he stayed with ra. my dad was never a cat person--not really a huge animal person--but ra got to him.

when they first moved, they kept ra inside the house until christmas day. we all sat at christmas dinner wondering where he was. ra always came home for dinner. ra did come home, and before it got too dark. but the entire evening my dad paced. he went out calling and searching for ra. it was then that we all knew just how much ra and dad meant to each other. ra chose him. ra sat on dad's lap whenever he could and dad could do anything to ra without ra flinching or putting up a clawed paw.

i'm sure it was dad's decision to send ra to the emergency animal hospital. mom and mike went.

when i spoke to them next, they were on there way to my house in sandwich. my mom said she wanted ra to be near denny--our dog that knew ra as a kitten before he passed away and who is cremated and stays with me here in my house with max in the other room. she wanted ra to be outside. he was an outdoor cat and wouldn't want to be far from the birds and grass he spent his life surrounded by.

mike was really upset. he didn't talk, didn't cry, just sat there. it looked as though he was even holding his breath at times. completely still. he spoke to ryan early that afternoon, and explained that he'd miss ra, that he saw a lot of ra. ra came into his room to get away from the dog, slept on his bed and meowed at him in the morning to be let outside.

mom and mike left me with ra, in his cardboard kitten coffin.

i let him sleep soundly in the basement over night. although i barely slept, when i did, i dreamt of him. vividly.

this morning, with tears in my eyes and a pain in my chest, i dug a hole big enough to bury a normal-sized dog...

it took me 3 and a half hours, but ra is resting peacefully now alongside his old friend wibble the goldfish. 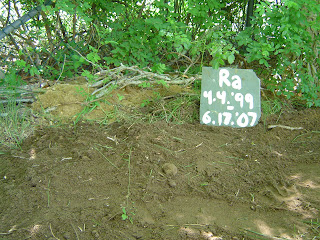 caramel and chocolate
in the underside
of a cracked box shell
Posted by katy at 9:34 AM No comments:

a strain of sleep

rub your eyes as you read
as if you just woke

from a long night of dreaming,
the seeds still in your eyes.
Posted by katy at 9:20 AM 1 comment:

our hair locked together
in the chaos of dim-lit stirring;

in an exploratory fashion
we executed the perfect knot

the only way out was backwards,
towards the desire you harbor

and the kiss i could have lived without.
Posted by katy at 5:09 PM 2 comments:

by damien hirst (the one and only) 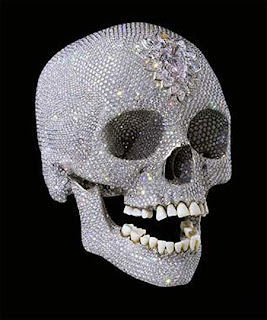 when i told him he had a stern face
he objected -

check out the current issue of vibrant gray

max was shaved, do you remember the pictures? on his front legs and sides. in patches.

i was thinking about you both last night.

it was november, then again in january -when we first met you. not due to any heat.

my dear, be glad for the cause and the purpose. to keep you cool, comfortable.

bury vanity and shame in a winter blanket and remember what would have been if they hadn't saved you. if they didn't love you so entirely. they wouldn't fight if they didn't care this much.

jack and rowdy say 'mreow!'
which i think means 'birdz!!' 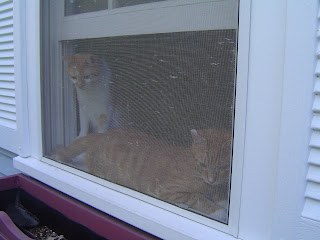 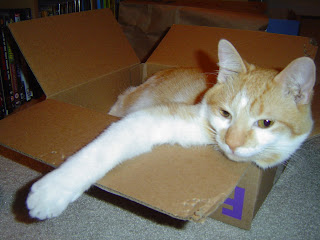 so... rowdy decided that in order to take the little chain ryan put around his neck off, he'd put a plastic bag on... i guess it must have made sense at the time... 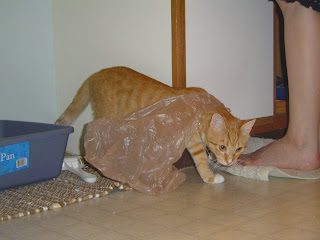 jack is a cat and jack is a little gorilla. jack and jack are friends. 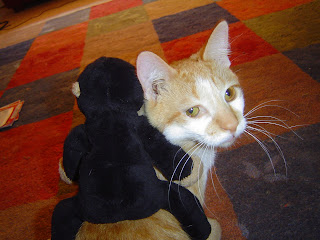 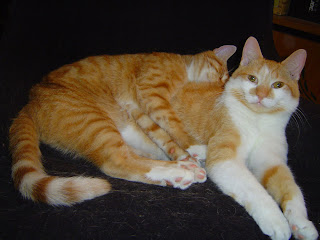 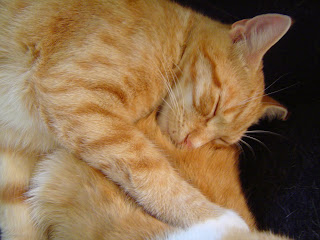 russell of Yuckelbel's Canon wrote me this lovely poem as an anniversary gift.

we were alone
for the first time,

but we've known
for quite some time.

at the grocery store
you stood close

as we picked out produce together
and discussed marinades.

i didn't mind the children
you called your own -

from a previous life
or marriage or affair.

you let me sit
in the front seat of you car

and my heart swelled
with lust and triumph.

but when she returned to you
and your brother came back...

with your family swarming,
i was asked to sit in the back again.

angry, complacent, trampled,
i wanted to go back

to last night, in my dreams,
where you embraced me as we slept.
Posted by katy at 1:00 PM 2 comments:

now, i know that for most the immediate reaction is going to be pirates... but perhaps you should consider reading up on gauchos and their amazingly amazing dinning stylee.
Posted by katy at 1:48 PM No comments:

the art of flirtation (in 3 parts)

you used both hands
to pass me my tea

and hushed my wince
with a sympathetic glance