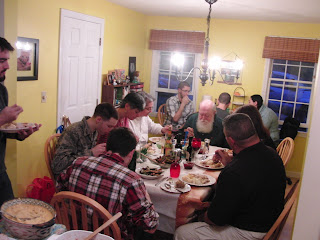 Happy Thanksgiving Day to all who celebrate this day.  Today is not just a day to eat, drink, watch American football, and take acceptable naps. 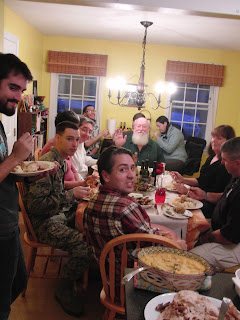 Today is a day to give thanks for all that we have and all that we are able to accomplish.  It's a lovely time to have family piled around a table which is way too small for all of them.  And by family, I mean moms and dads, brothers and sisters, mother-in-laws and brother-in-laws and father-in-laws, and dad's friend Jim and our friend Matt who had to go straight to his work after dinner, so came over in his air force uniform.  By family I mean all the people you care about, you love, and you hold dear to you.
This year was particularly meaningful and important to me for several reasons.  This was the first year Ryan and I hosted Thanksgiving at our house in Sandwich.  That might sound stressful, but I am thankful that everyone offered to help, and I accepted.  Meg brought munchies for before dinner.  My mom made the stuffing and came over early to put the turkey in the oven with all it's dressings and fixings.  My sister's mother-in-law, Jane and father-in-law, Jim, made turnip and potato mash as well as a pumpkin pie and hot apple cider.  Ryan helped entertain, carry around chairs, and was at my side every second I needed him to move or lift or pour.  My brother helped with all the dishes.  He is awesome. 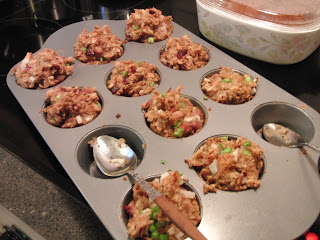 I am also thankful for the mere fact at having my whole family with me today.  My dearest friend Danielle lost her brother only two weeks ago.  Nick was 32.  My Ryan's age.  It was sudden, and shocking, and sad.  I have been thinking about Danielle, Chris, and Lenny all day today.  They lost a bright light.  I am grateful that every time I talk to Danielle, she seems to be doing well enough; although, I know she must miss her brother dearly and my heart goes out to her. 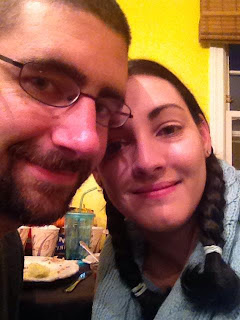 Just Saturday past, Ryan and I went to the annual ThanksGathering held by a darling family, the Bells.  You know Bell's Seasoning?  Same family, though they don't own the business--their grandfather sold the recipe to the now owners/makers.  There, Ryan and I engaged in conversations with the tens of other guests, got to show off a little baking, a little flare, and got to gawk at some pretty guitar strumming.
There, at the Bell abode, I got to talk to several friends.  Iliya, I discovered, smiling, is happy in his challenging new work environment.  He works with struggling children in a struggling city in western mass and has somehow been given the role of basketball coach, just because he's tall.
Peter was in Iraq over 5 years ago.  He came home safe only to be caught out by some black ice while driving home.  He hit a tree and woke up out of a five day comma.  He suffered brain damage and paralysis.  He forgot almost all of his Arabic except for habibi (a very sweet word, which one says with a gleam in their eye.  it means sweetheart.).  But Peter is getting better after 4 years of slow, frustrating recovery.  He is alive, he is optimistic, and he is an inspiration. 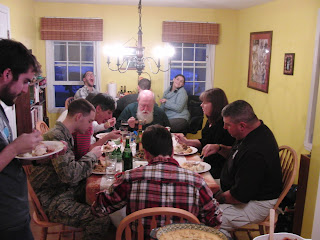 I was complimented about my macarons, hugged by many.  I talked to a young man about the Gropius House, and architectural history and preservation.  We also talked at all ends of the spectrum on displaced people, refugees.  How not being able to sleep in his own bed while construction takes place in his house makes him a displaced person, although not to the extent someone from New Jersey might currently feel--having to celebrate this holiday in a stadium with thousands of others, or in a stranger's home. 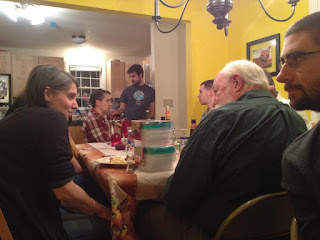 There were talks about technology, about food, about work, about cats (lots of cats), about music, about jam and jelly and military careers and marriages and babies, about happiness and positive neuron pathways.
I didn't, while I was there, talk to a young Ana-Maria, though.  It wasn't until the day after the party that I saw on her facebook page that she felt at odds, at a crossroads.  And I have been meaning to write to her about the time in her life which she is inflicted right now.  I will.  Ana-Maria, I am going to write you a letter.  But I need your address. 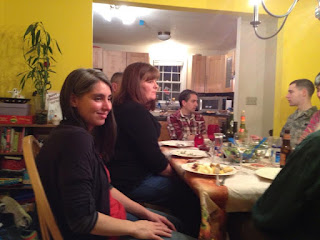 Thankfulness and gratitude take many forms and come in many magnitudes.  I have only begun, only a little, to explore some of the elements of my life for which I am grateful.  There are not enough words, enough pixels, enough keys, to express all that I am thankful for... so I'll save some for another post.
Be grateful.  Be thankful.  Share love, and be loved.

two days ago, a young woman named Xu
got on a subway to escaped the rain
where she met a man who needed her help.
today, on the fourth day of the first November,
she leaves his apartment, having done all she can for him,
but feels something inside her rumble
as she closes his door shut and stares out
at the entrance to the city street.
she is paralyzed by a fear of the oncoming,
the oncoming of what, however, she cannot know.
she cannot know that the city in the jungle,
in it's very first year in history,
is about to be destroyed.
she cannot know that she is, right now, leaving
the one person who would keep her safe
when the city falls to its knees.
Posted by katy at 10:47 PM No comments:
Labels: November, poetry

you might remember our hero
whom we met yesterday
as he entered the subway with bruises and cuts
but was never given a name.
his name is leonard and today is his birthday.
38 years before the first November in our history,
but well after the invention of the subway,
leonard was born and his epic story began.
we rejoin him on the morning of November Third -
the first November Third in history -
leonard is in pain from the fight he fought the day before,
but his pain is eased by the smell of coffee
and bacon and something else... maple.
there is someone in the kitchen.  someone we haven't met yet.
someone whom leonard met yesterday
on the train he used to escape the city in the jungle.
Posted by katy at 10:00 AM No comments:
Labels: November, poetry

the story starts, "it was a cool day in November"
but what the story doesn't tell you
is that every day in November is cool.
today, rain seeped out of grey clouds
that lay low against the jungle's roof.
and today we meet our protagonist
as he warily exits the bustle of the city -
the city that hides indiscreetly
under the palms of our jungle setting -
and enters the altogether new trappings
of the subterranean transportation system.
his face is battered from being hit and thrown
by a man in an office, as it often happens in stories.
but our hero still looks dashing with cuts across his cheeks and nose.
there is only a slight tear in his silk shirt
and his hair, although messy, still looks fashioned.

Posted by katy at 9:59 AM No comments:
Labels: November, poetry

the story begins "it was a cool day in November"
but what the story fails to mention
is that "cool" on this side of the planet,
in the belly of the beastly jungle,
is really rather hot.
too hot to walk on sand without shoes
too hot to sit out in the sun's rays
without your face burning to red,
no matter what color you started out as.
alas, it was November.  the very first day of the month.
the very first day of the very first November
as it was recorded in our history.
it was a Thursday.
the best firsts usually are.
Posted by katy at 3:36 PM 2 comments:
Labels: November, poetry
Newer Posts Older Posts Home
Subscribe to: Posts (Atom)