tingle to the pink on a burnt belly
and the melting, rising to the temperature
of early summer in a little shop

the spray painted white sticking
to bear legs sticking out of skirts
and tongues minted in sweet, patient molecules of cake
Posted by katy at 11:04 AM 2 comments:

Back Story:
you know how carnivals and fairs have lots of junk food stands? and they usually have really big banners listing all the things they sell? for example, ryan, ashraf and i were at a book fair in Philly a couple weekends ago and there was a food stand with two signs, one on top of the other, which read "Lemonade" and "Hotdogs".

now, imagine you're ryan and your brain makes games of taking things too literally. "Mmmn, lemonade hotdogs!" then ryan continued by musing out loud about how a lemonade hotdog would actually taste.

and so, as we walked to fogo de chao to meet don and elanine, ryan and i worked out the ingredients for lemonade hotdogs, or what i now call Ryan's Lemon Dogs.


Recipe:
you will need the following items to make your own Lemon Dogs...

-hotdogs (all beef franks by boars head are the bestest)
-lemonade (something simple, made with real sugar and as few additives as possible)
-soft hotdog rolls (or hoggie rolls of bread, or whatever you like to put your dogs in)
-a sweet vidalia onion
-swiss cheese (ryan and i go for the real stuff, know in most grocery stores as Emmental (imported from Switzerland)) 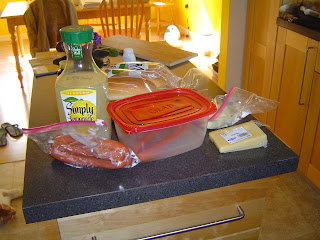 use a fork to poke lots of little holes in your hotdogs then marinate in the lemonade for at least half an hour. the more holes, the better.

after marinating, cook the hotdogs as desired (we broiled ours in the toaster oven, but outdoor grills are the best, i think)

while the hotdogs are cooking, brown the chopped onion in a skillet (we used cast iron, tastes nicest). once onions are cooked, add slices of Swiss cheese to skillet. cook until cheese melts and you are left with a yummy gooey cheese sauce.

place sauce-e-goodness on roll and place the cooked hotdog ontop.

Taste?
surprisingly delicious. i had trouble tasting the lemonade flavor at first because i was also drinking lemonade with my hotdog. there were definitely moments, though, when my hotdog suddenly tasted extra sweet and tangy. we're thinking, next time, more pokes with the fork and longer marinade time. ^_^
Posted by katy at 10:31 PM No comments: 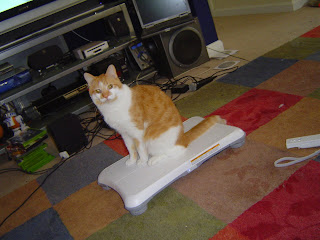 so, got wii fit, to get fit. started yesterday afternoon, continued this morning. so far the following parts of my body ache like never before: everything between my upper arms (shoulders included) down to my knees. did you know there are muscles in the side of your stomach? *itaaaaaiiii!!!*

wii fit is wii fun and i am actually looking forward to playing agian tomorrow! more updates to come.
Posted by katy at 2:59 PM No comments:

a bike ride on the sea, through the streets of
your Beirut

the humid spring air is scented with orange blossoms

(thinking of the family)

inanimate eyes locked
in the purge of lust

two poets, behind masks
return to form together

they are bound
Posted by katy at 1:07 AM No comments: 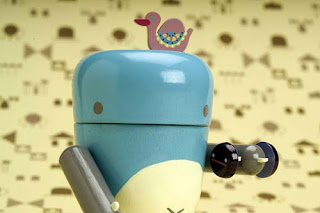 we love the men that make us and break them
over our knees like children
with the will of our eyelashes
Posted by katy at 12:55 AM No comments: 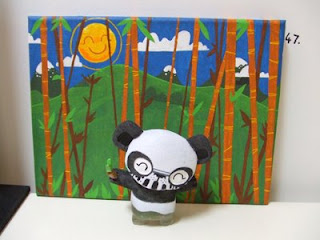 scolded in the shape
of Buddha and pests alike

for dinner with the president
of Alpha Centauri or Russia

where the elephants are mighty
in art and masters of ceremony 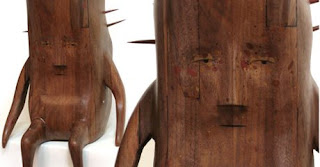 today, the first of may,
i work on self identity and imagination

out of recycled foam cups, shaped
in the shadow of young men with long hair

while i think about planting more bulbs
in the front garden come september
Posted by katy at 12:23 PM No comments:
Newer Posts Older Posts Home
Subscribe to: Posts (Atom)