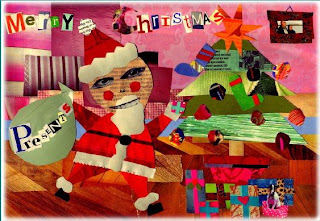 stretch me in
the wake of the sun

the hiss of
an autumn morning

my triumph and the bold
return in the dust

of a season less
faltered by a creased brow.

the scent of a
decaying leaf

in a child's palm
awakens us to love

and the secret life
of rags and fools
Posted by katy at 9:19 AM 4 comments:
Labels: poetry

my hand in yours

and the sailor in the wreck
Posted by katy at 8:29 PM 1 comment:
Labels: poetry

here's a toast, to ugly birds that taste so good...

Kim and I went to CT with our Roots & Shoots gang in middle school -sixth grade- to meet Jane Goodall. that's how long i've know her.

check out Kim's art and webdesign. i think, time permitting, i might eek out on these later.
Posted by katy at 10:30 AM 1 comment:
Labels: poetry

pseudonym "unsaid" started a blog to keep track of his/her poetry submissions, acceptances and rejections. it's a new blog, but if he/she keeps up with it, i'm excited to see how the adventure unfolds.

MY SISTER IS GETTIN' MARRIED!!!
Posted by katy at 6:13 PM No comments: 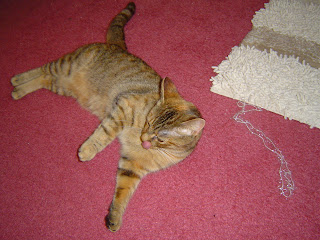 and this is the little story about how she came to live with us. 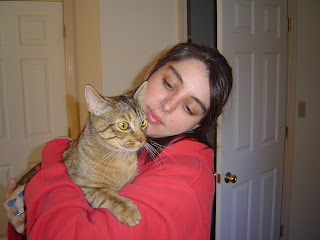 alli used to live with bobby. bobby works at two brother's pizza with me. he had to find alli a new home because she kept trying to sleep with his three month old baby; bobby's wife was nervous about the cat in the baby's crib and made him find her a new home.

i mentioned that there was a young cat up for adoption to my sister while at my mom's house and it was my mom who jumped at the offer. so, one monday afternoon a few weeks ago bobby dropped alli off at my mom's house in yarmouth.

after two weeks, my mom, dad and brother were pretty sure that alli and pippin (the lovable but excitable corgi) would never get along. my mom told me over the phone last week that they weren't going to be able to keep alli.

of course i felt guilty by association. i was the person that made the connection and introduced the whole idea of alli living with my mom and dad. so i told ryan and ryan thought, then, that we should adopt alli for a while to see how she got on with jack and rowdy.

we brought alli home after sunday dinner last week and all manner of kitten fury rose. the tension was high and ryan and i weren't sure what to do.

thank goodness for the internet. ryan and i read up very quickly on what to do when introducing a new kitty to the family. we gave alli her own room with toys, food and litter. we put jack and rowdy's food near the door to her room, and have been giving all three of them treats by the door. we also traded toys, blankets, and strokes as a way of getting all the kitty smells combined and mixed up. we neutralized them to each others' smells.

after a day or so we let them see each other through a crack in the door. they got better and better about seeing each other. rowdy made huge improvements; especially considering he was inclined to hide in a different room to her at first.

today was their first play session. ryan and i got everyone in one room and moderated. they're still sensitive to each other, but what a difference from just a week ago. there'll be more play time sessions before we let everyone out for good, but ryan and i are pretty confident that the three of them will be able to live comfortably with each other.

so, jack and rowdy have a new sister.

p.s. alli bit my finger while i was playing with her wednesday night (completely my fault) and it got infected, which hella hurts and the antibiotics give me a silly sort of stomach ache. anyway, that's why there's a brace on my finger in that picture with her. and why my hair is a mess (really hard to put my hair back with one and a half hands). and yeah, this has taken me quite a while to type >_<
Posted by katy at 12:32 PM 1 comment: 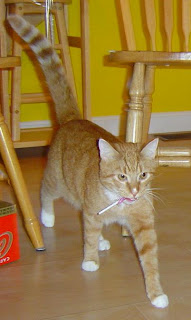 there's a skeleton staring at me as i write my paper at the wilkens library at the cape cod community college. he looks a bit thin. he's missing some ribs--they've been replaced with rubber molding.
Posted by katy at 11:41 AM No comments:

Shirley Allard (you may know her as HouseMouse) is seeking dedicated, quality poets to writer for and/or submit to her online magazine called Word Catalyst.

If you've got something knocking about, send it her way (there's an email address on the submissions page of the mag's website).

got 19 minutes to spare?

this is the best holiday-season song ever

happy november!
Posted by katy at 11:10 AM No comments:

you need to read Kristin's poetry

I wonder what a skunk feels like
if you drive your hand
into their rich fur.
I'll bet they're very soft,

an alter of an animal,
slow and careful, at which to worship
when we've run out of better ideas --

The skunk by the library doesn't share a body
with a hundred others like him.
The one I saw yesterday is the same one I see today.
When I stare, strangers stare with me.
We stare together. We walk in a half moon,
building another planet
around the skunk, like trash can lids.

visit her live journal blog for more awesome poems like the one above!
Posted by katy at 9:53 PM 2 comments:
Newer Posts Older Posts Home
Subscribe to: Posts (Atom)