he used to sit there --
under the dying apple tree --
picking bark off the trunk.

not a poem, a picture of pumpkins 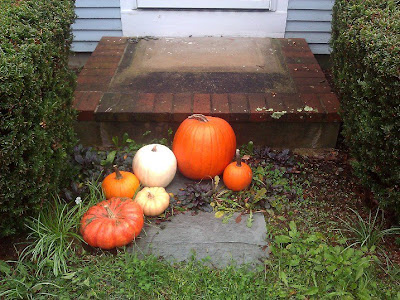 we adopted nine pumpkins
but three of them are too small
to be left outside at night
with the bigger, stronger ones
so they sit on the kitchen table
with the chrysanthemums
i bought on sale a the grocery store
on the friday night it rained

we call her alli
butterscotch
princess

we call him jack
jackie
jacko

we call him rowdy
rizzle
pumpkin

they call her george
and pretty lady, but
i call her ringo

what makes happy?
cats' paws. candy coated chocolate. a compliment from a stranger. a green light. dishwasher tablets. sea salt. soft blankets in winter. recycling. the little sayings on yogi tea bags. newly applied paint. the *tink* *tink* sound the play station 3 makes. snuggling. a brand new tube of tooth paste. friends. friends with apple pie. time for bed. a bright morning. breakfast smells. tea with honey. mom. pictures of books. turning the pages. watching tv shows with friends. laughing. purring. smiling.
the list goes on and on.
[add to it in the comment section if you feel so inclined.]
Posted by katy at 10:04 PM 1 comment:

tied on two ends
to one of the remote docks

is an old orange ship
rusty in most places

old and creaking
against the waves

no one goes out
to the old orange ship

her name is worn
off the side of her hull

no one knows the name
of the old orange ship

as the secret home
of stray cats and seagulls
Posted by katy at 6:52 PM No comments:

for traveller across
all lands and scapes

the travelling band
know so many songs

from all the countries
they have travelled

with all of the instruments
they need to perform

so if you ever see
the travelling band

The bog behind our house has started to turn a pretty red color.  I will be watching closely and taking pictures as the harvest begins within the next month or so.  ﻿ 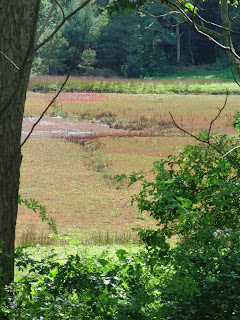 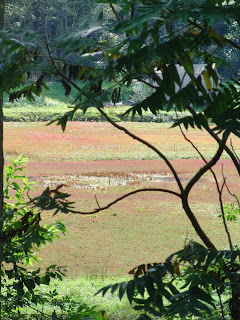 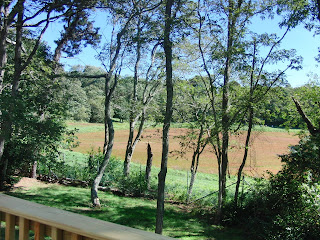 The kitties will also be watching out for cranberry harvesting. 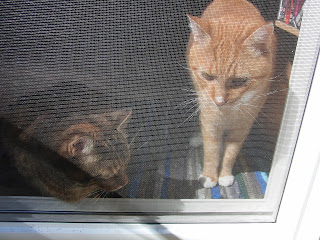 the alignment of planets
has nothing to do with how many halos
can be found around the crown
of a cat
Posted by katy at 8:09 PM No comments:

but when it came time for his maths test
he couldn't remember, or figure out, the answer

in guessing it might be, little anthony
reapplied himself to multiplication

but gave all his answers in arabic, chinese,
and roman numeral answers.
Posted by katy at 4:06 PM No comments:

the creeping of carelessness
over the cast of clouding skies

on the crest of a loveless night
caressing our memories

of a creature still unclassified
by the collectors and colleges.
Posted by katy at 11:35 AM No comments:

but one day came, not too long ago
in comparison to the life of the tree

on that day, the tree was torn from its roots
in a great flood that swept the forests

today, the kodama find shelter
in the most peculiar places

lost as they are, away from the forest
and the trees they grew up knowing best

long ago blue, green, yellow and orange
were four fellows, all friends, and sat awaiting
the on-come of storming angst
as it bubbled and boiled up over the edges
of a small pot with twin braids and penny loafers
sent away from home by ill equiped parents
in a time of economic weather and sunshine.

it wouldn't be long before the fire in her eyes
grew so strong and hot that lasers would be born
and directed at four friendly fellows
all helpless to save themselves under any attack
especially one of such magnificent array
of color and texture with spices from all seven
of the major continents on earth.

on our last adventure
you gave us away

tweeting like a bird
on the limb of a tree

telling the whole world
about the little deer

we found hiding
under the piano bench

that had been abandoned
by the woodland pirates

in the last hurricane.

the chirps and croaks
of little bugs and little frogs

huddled in the folds
of the cranberry bog

under the blue black sky
of a night without a moon
Posted by katy at 9:05 PM 1 comment:

marry the guy
who makes pancakes

without having to ask
what you want

when he wakes you up
at 9:30 with warm syrup

and a cup of sweet warm tea
to go with your breakfast
Posted by katy at 8:54 PM 1 comment:

A Cat Called Home-Buyer (a drawing) 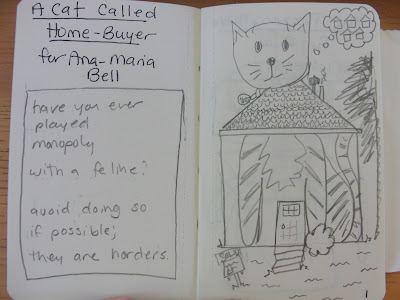 i have never actually played monopoly with a cat.
Posted by katy at 9:34 AM No comments:

a winter spirit
trapped in other seasons
can't wait in comfort
for the cooler days
and the twinkling
of frozen dew
on cool-green blades of grass.
Posted by katy at 4:39 PM 1 comment:

she wasn't there that day.

she missed the rainbow.

is that one can see rainbows,
while the other cannot.

so she never saw the rainbow
through the camera
that couldn't.

brown and big and wet
she charges through the river water

thrashing around the rocks
to catch salmon in her mouth

his friends call him whitney.

1.
a great beast approached the women
who laid on the dunes in summer
to let the sun darken their skin

its sides were deeper brown than skin
with flags of great, cloud like white
and beams that moaned with every turn.

the women, from fear of the great sea beast,
ran to their children and ran to their men
to warn them of the oncoming threat.

2.
the mighty sea baron took anchor in hand
and lobbed it overboard at the first sight
of grassy foreign land he came across.

he did not notice the women yelling
as they ran away from his anchor
failing to land on them, although it tried.

his roar was mighty and demanded his crew
to saddle up and prepare to explore
this bountiful new world he had discovered.

3.
it took the baron's crew six hours
to ready themselves for their magnificent landfall
because the band's piano needed tuning

and no man dare make a great discovery
without a full orchestral soundtrack
to accompany  his triumph, especially the baron

a man of grave pomp and opulent circumstance
that would make the very queen of the empire
weep in admiration for his efforts and ruffled collars.

4.
the women's men were ready for the beast
to attack them with what mythical forces
they knew it must possess, the way it hollered and sighed

they had never heard so many terrible sounds
coming from one such terrible creature
as the black beast form the sea that loomed off their shore,

they sent warning cries and beat their drums
to ward off the great threat that came form the sea
and scare it away with their traditional songs of war.

5.
upon reaching the shore the baron was greeted
with great hooting and howling and wailing
and drumming beats and stomping feats and whistling,

so that he might bring beach music back to his queen
and be awarded the highest honor of all;
the balcony at the opera and a glass of sherry with her Majesty.

where he read it, his head rested against the head board
with a floral-covered pillow for comfort

he turned the pages faster than she did
soaking up the plot, letting his imagination fill in the gaps as he slept

they read it all, every word, differently
and understood the story in different ways

one came away with morals
one with corruption

of their day to day struggles,
their life, reflected upon white pages in black printed ink

we had a lot of rain yesterday

i think it was called hurrican Leslie... and it looked like this: 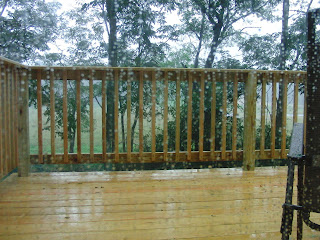 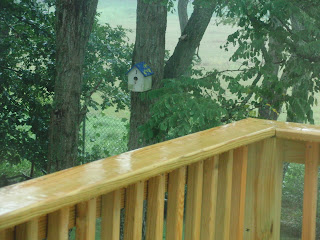 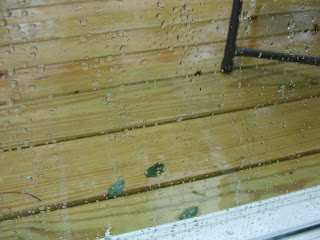 but this morning, the sun was shining and many cats did enjoy its rays... 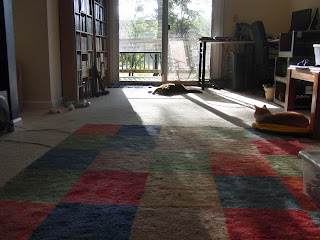 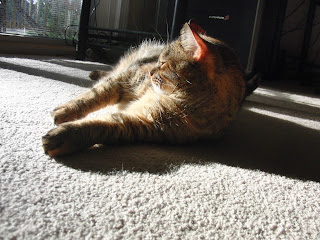 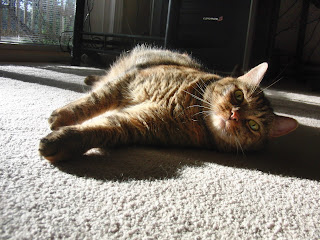 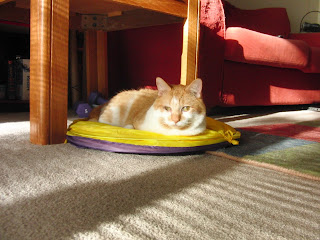 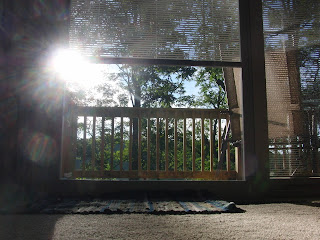 jack is gonna wreck it

jack got a new journal. 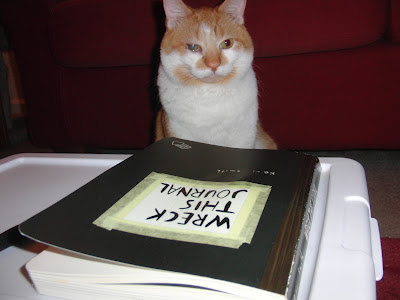 at the very end of our world
there is a strong, old tree with a rope swing

more, at least, than if you'd just jumped
straight off the edge without the swing 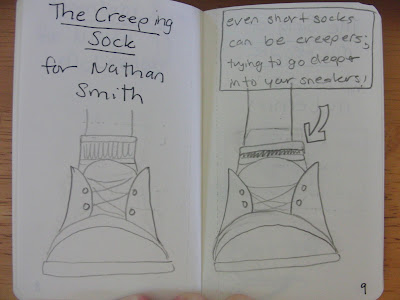 the paper dries out the skin
on the palms of my thumbs
as i flick through the pages
of a book about bums.

(ryan wrote the last two words of this poem. please enjoy.)
Posted by katy at 10:00 AM 1 comment:

song of my people for Nicole 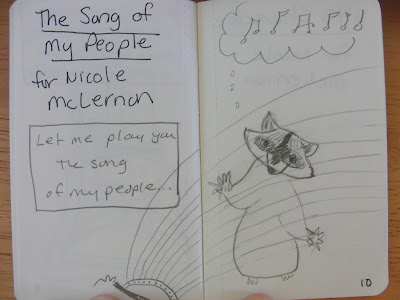 he brought for you, made just the way you like
with sugar and milk to weaken the bergamot

and watched as he began to wept as he told you
that he wasn't sure if he could stay much longer.
Posted by katy at 10:00 AM No comments:

down the length
of a woman

tall and proud
her skin burnt

i asked some people to give me titles without telling them what these titles were for (because most people would assume the titles were for poems).  and then i drew these... and i am no artist... as you can see... 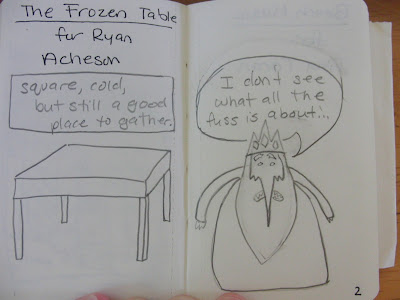 synthia silvershire
was a wolf hunter

born into a family
of infamous wolf hunters

from a very young age, synthia learned
to track and kill her familial foes

she wore a wolf skin hat, lined
with the precious fur

of a great white wolf
her father had killed

but synthia was still young
she still had a heart

and could not take the lives
of those cubs she found

as the wolf woman.  no longer a hunter,
no longer a killer, now a mother.

and for this, she too
was abandoned by her family.

breakfast on the deck 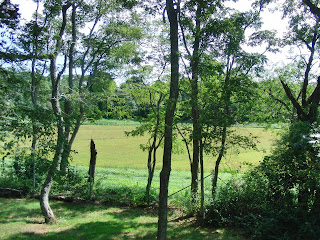 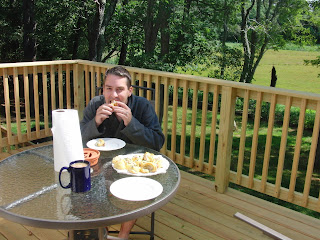 but at least it was made form gluten free swiss roll... 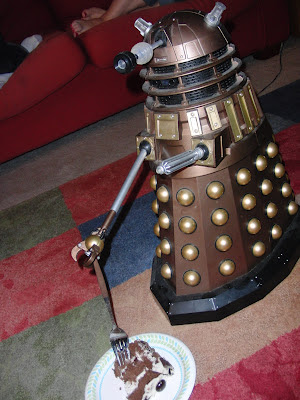 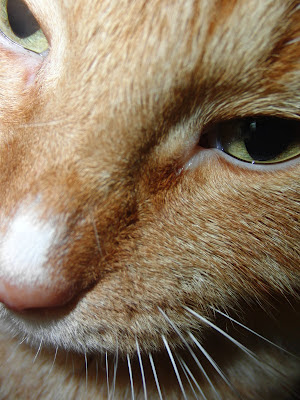 Rowdy was a little annoyed
at how close the camera
got to his face.