happy saturday all. yesterday max spent 6 hours at the vet's. he got his first full dose of chemo, some more fluids, and ryan and i got given some pills to give him once a day for the rest of the week. max will be going in again on wednesday for some blood work and again on friday for his next full dose of chemo.

max doesn't has have leukemia according to the blood work done. he might have it in his bone marrow, but if that's then case (and we're hoping it's not) than there's nothing we'd be able to do for him because you can only treat the leukemia or the lymphoma, not both. just diagnosis for bone marrow leukemia is about $300, which we're not keen on having done to beginning with, so we're going with the lymphoma treatment full on and praying for the best.

also, found out that he weighs 5lbs9oz - he's so little.

when we brought him home last night he was sticky and smelly and tired and feeble. i was nervous about his condition. he was the epitome of pathetic. ryan and i just let him sleep though, and went to see my dad for his birthday. we came home and he was still sleeping.

at some point in the night max must have gotten up and ate some of his canned food, which is great. as ryan and i started getting out of bed, max came out from under the bed too. he stretched and we could tell right away that he was looking better. he seemed to have cleaned himself over night too. he'd been looking really scruffy. he looks a little scruffy still, but much less so. 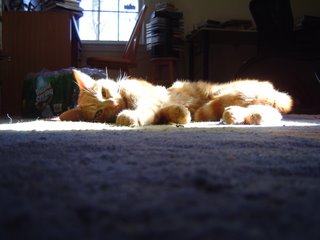 max ate more food when he got up. he followed us down stairs and even had some cheese with me this morning.

he's looking pretty good. he seems well. definatly not any worse at least. 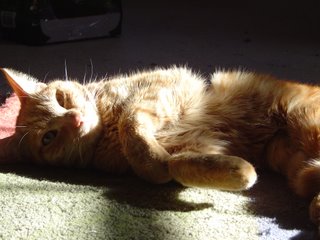 i'll continue to keep everyone updated via my blog.

as of right now, max is playing with an ant.

p.s. for poetry, go to piloteye