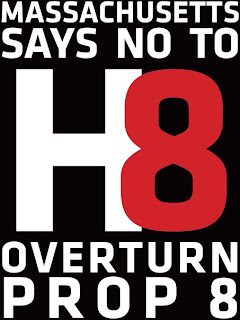 the gay rights issue at large right now is one i have no trouble taking a firm stance on - unlike many political issues wherein i don't know or understand the full scope of the issue. there isn't much to understand here: the right for same-sex couples to marry in the state of California has been rescinded. and the cause is even more audacious... what place does a church have in lobbying for a vote one way or the other? there's that good old saying "separation of church and state" composed by the men who fought to secure the human-rights of all men and women governed by this country. blah blah, you've heard all this already, i know.

it may be too late in the day for me to shake a moving passion from the bones in my fingers, but that's no reason not to make a small stand in favor for all of those who plan on attending peaceful protests on Saturday to defend the rights of their fellow men, women, straight and gay.

to think, that in one day, we as a country made so much progress. we elected a mixed-race president and a little town in Oregon elected the first trans-gendered mayor. and on that very same day, we as a nation reminded the world just how bigoted and backwards we can be with the several gay-marriage ban election questions. bans which people agree. it makes my stomach turn.
Posted by katy at 11:17 PM